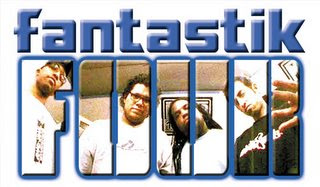 In August of 2004 I was flown out to L.A. to spin the bboy summit, And what an amazing trip it was. Crews from all over the world come to this event, its like a week long event...and anybody whos into bboy/bgirl culture is there. All the legends like my fam The Floor Lords/ Flava Squad
Grandmaster Caz, and D.S.T were there spinning as well. At one point D.S.T drops Beyonce's crazy in love !?! Now no disrespect to a dj of that stature...but my man...its a bboy jam. Needles to say Asia got on the mic and fixed that real quick.
Now, on with my trip...I called the homie J-ROCC (BEATJUNKIES) to let him know id be in town, so he invited me up to power 106
for Friday Night Flavas (r.i.p) with Mr.Choc, Truly Odd, and C minus. I didnt have serato at the time, so this was all vinyl. I remember getting really really stoned off some cali kush...never do that before going up to the radio !
J-Rocc was kiling shit as usual...whats a trip is people always think Amir and I are from NYC..when we are from Dorchester/Roxbury...
I played joints from Buari, Eddie Grant, Rimshots and some other shit....really all I brought was bboy related records minus a few mellow joints...I think this was also the 1st time Matt Cassell got any burn on the radio...after I played "In My Life" jaws dropped and Mr. Choc was like ...."what the fuccckkkkk izzz that" ? Well, yall should know about Matt by now, after comping that jam on BBE. So, I stumbled on to this mix that somebody had recorded...thank god cuz I never heard it til today !
Anyway heres the link
KONLIVEPOWER106.2004
Posted by KON at 6:55 PM 3 comments:

We (Amir) and myself have a new internet radio show that you can stream or download a 1 hour mix each month. So far we are on month 2. Last month we did them seperate and then i combined the 2. These are done LIVE...REAL mixing from REAL vinyl..with the occasional edit that doesnt exist on vinyl, in which case serato will be in effect. Hopefully we can start to get some guests as well as interviews....and those who know me know I like to talk shit and bug out. Shouts to the homie Chairman Mao as he also has a slot on this site as well.
Im off to nyc to spin this friday at APT...in case your reading and maybe in the area.
go here to peep it...im too lazy to do the html coed so copy and paste.
www.spinemagazine.com

Also..BBC radio 1 will be broadcasting mixes from Amir and Me on Aug 9th...again all LIVE in the mix all VINYL.
I grabbed some 45s and just let them rock..so look out for that.
Big shouts to London...been getting alot of love out that way.
Posted by KON at 2:17 PM 8 comments: